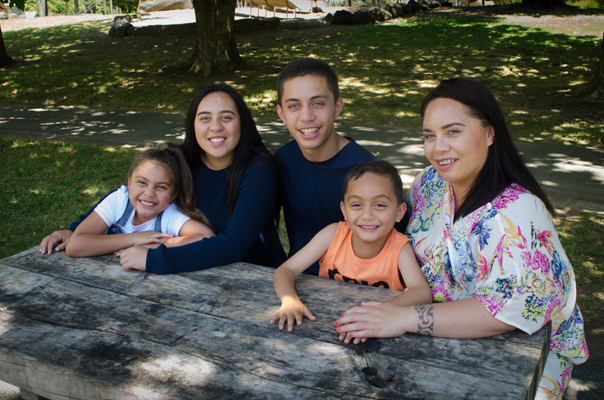 Mr and Mrs Smith are under enormous stress. They have three children living at home, Mr Smith hasn’t been working, they’re struggling financially, and they both have mental health issues.

Furthermore, for a long time they haven’t had the parenting or life skills they need to run a home and raise a family.

As children Mr and Mrs Smith both experienced trauma and family harm—their lives have revolved around physical and sexual violence. Now their own relationship includes incidents of violence—some serious—with their children watching.

“When a child witnesses family violence the effects are exactly the same as if the violence was directed at them,” says Jane, a Family Works budgeting advisor supporting the whānau.

The family has been referred to social services many times—their eldest son was uplifted and lives with his grandmother. Now they are being supported by our Family Works team.

When Raewyn, a Family Works psychologist, first entered the Smiths’ home she noticed there was little evidence that children live there. For instance, there were no toys lying around.

Raewyn’s role was to help Mrs Smith grow her parenting skills, which she primarily did by encouraging Mrs Smith to put her relationship with her children first, even in the stress and chaos of their lives. Raewyn also supported Mrs Smith to implement skills she’d learnt on a parenting programme.

“In order to manage her daughter Sophie’s behaviour we focused on their spending more one-on-one time together,” said Raewyn. “Even just a visit to the park or a few moments each day.”

They also worked to introduce more fun into family life, and to prioritise the children’s needs, especially food choices, hygiene, and wearing the right clothes to school. “The family has significant risk factors,” said Raewyn, “But both parents were really keen and committed to getting better.”

By the time Raewyn had finished working with the family, Mrs Smith had converted the front room of their house into a playroom with toys—of her own volition.

“It was a really nice change,” said Raewyn. “Sometimes people don’t think they have the power to make changes. People feel boxed in and hopeless. Services like ours can help them understand that they can learn to do things differently. And give them hope.”

Meanwhile Camille, a Mana Ake kaimahi at Sophie’s school, has been helping the child manage big emotions at home and school. She was experiencing “meltdowns” in class, using inappropriate language at the teacher and other children and being generally non-compliant.

Camille met with Sophie every week for about a term, helping her to identify emotions, explore how they felt in her body, and discover ways to manage them. Sophie learnt she could share how she felt with a safe adult and manage some big emotions using her breath. Mrs Smith reported that after the work Sophie had fewer big emotions at home. She still struggled in class but her teachers noticed that she was overall more settled.

Getting finances in hand

The Smiths are living pay cheque to pay cheque, without a budget and with no financial plan. Jane provides home visits, which makes it easier for clients like the Smiths to keep appointments.

“Home visits also let me observe people in their home environment,” explains Jane. “For example, if there’s food in the cupboard, or if there are incongruous items such as large TVs bought on credit.”

Jane is helping Mrs Smith identify what benefits she’s entitled to and how to tackle debt, as well as the basics such as how to create a budget.

Hope for the future

The Smiths have received wraparound support both in their home and at school. Both parents have been involved as well as teachers and the children in order to manage and mitigate their risks. This significant intervention will create sustained positive change for the family.

*All names and photos have been changed to protect privacy.

We work with many whānau like the Smiths but we can't do it without your help. Will you make a donation to help?

The kindness of Margaret
Naomi's story
The best day ever!
One proud mamma!
Moving day
Subscribe to our free magazine.
More info