The kindness of Margaret 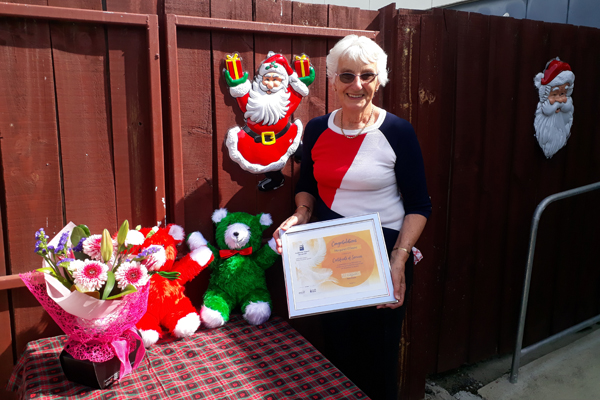 Margaret Ellmers might have decided to retire but the 80-year-old isn’t the type to sit back on her laurels and let the days drift by.

For 16 years she has been a volunteer at Presbyterian Support’s Enliven Tōtara Club in North Canterbury. She’s really got stuck in, helping the members enjoy activities and friendship, serving meals, chatting, entertaining and sharing stories. But Margaret has gone far beyond the call of duty. She’s lovingly tended the Tōtara garden, taken drapes home each year to wash and even cleaned windows! She’s also a keen crafter and has made wonderful, colourful teddy bears which have been raffled to raise money for the Tōtara Club.

Margaret grew up in Greymouth, was a competitive swimmer, winning two West Coast titles. She’s been active all her life, has a ‘blended’ family of five children and has had two husbands. Margaret and her second husband had a large farm that included growing asparagus, something they worked on together for eight years. After the death of her husband, Margaret moved into Rangiora and became a Presbyterian Support volunteer.

“While I enjoy spending time at home, I have enjoyed coming to the Tōtara Club,” says Margaret. “I’ve made wonderful friendships, have enjoyed a lot of laughter and feel incredibly valued.”

Margaret’s appetite to always have something to do is part of her charisma and the amount of energy she has brought to Tōtara Club.

“People say organisations like Presbyterian Support get a lot from the contribution made by volunteers and I can’t deny that, but I think I get more out of being a volunteer than what I put in.”

“Being a volunteer gives you a purpose and without a purpose you’re not going anywhere. You’re doing something for someone else. You learn something from the [Tōtara Club] members. You hear their stories and you share their ups and downs. It’s wonderful.”

Margaret is a treasure and she’ll be greatly missed but we wish her well in retirement. She certainly deserves it!